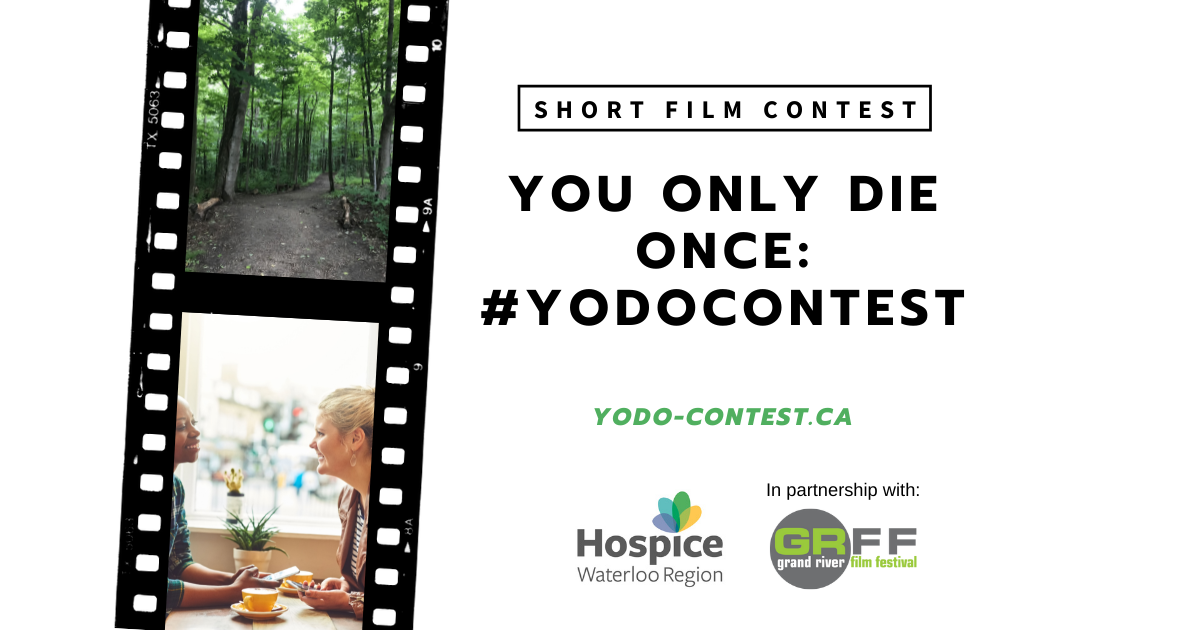 Hospice of Waterloo Region (HWR) is proud to partner once again with the Grand River Film Festival (GRFF) to launch a short film competition that aims to get community members talking about what it means to live well until one dies.

You Only Die Once: #YODOContest calls on filmmakers and storytellers to focus on death as a part of living. We are looking for short films of no more than three minutes in length that explore and educate others about death, dying, and bereavement (journey of grief) in a personal and unique way that can benefit the community.

“Over the past few years, HWR has been exploring creative ways to engage the community in conversations about death and dying. This short film contest was created to challenge our artists to bring their creativity to a conversation often avoided: that of death, dying and bereavement,” says Sheli O’Connor, Director of Community Engagement and Partnerships, HWR. The winning films last year were exciting and innovative.  We are so thrilled to be able to continue to celebrate local innovation.”

“Last year, GRFF partnered with Hospice Waterloo Region [we don’t want any confusion about which hospice] because we believe that film is the perfect medium to explore difficult ideas. We also champion local filmmakers, and any opportunity to elevate their work in the community,” says Michael Clark, Chair of Programming, GRFF. “The response, both from the submissions and from the audience when the winners were screened, was incredible. It is our pleasure and honour to partner with the Hospice again, to awaken the creative energies of the amazing talent in Waterloo Region, and showcase locally made films.”

Currently, HWR is accepting proposal submissions from professional and amateur filmmakers and storytellers. To be eligible, applicants must be currently living in Waterloo Region and be 20 years of age or older Applications are due by Oct. 15, 2021.

PROPOSAL FORM
Selected filmmakers will be contacted by Nov. 5, with final films due Feb. 25, 2022. The winners will be announced on Mar. 25, 2022, with the winning films to be screened at the Grand River Film Festival. To learn more, visit yodo-contest.ca.

“Partnering with the Grand River Film Festival has been an outstanding experience.  Their efforts have repeatedly demonstrated the power of creative filmmaking to impact and inspire conversation on a variety of topics,” says O’Connor. “Once again, we look forward to showcasing the ingenuity and skill of local video artists to spark these important conversations.”

Hospice of Waterloo Region has been delivering hospice palliative care services in Waterloo Region for over 28 years. With over 250 volunteers and the professional staff, services are provided in the community, in homes, long term care, hospitals, and retirement homes. And, as of March of this year, services are now also delivered at The Gies Family Centre. The Centre includes the new 10-bed Cook Family Residence, where individuals and families can spend their final days together.

Hospice Waterloo Region supports and cares for people with a life-limiting illness, at no cost to the client or family, everywhere in our regional community: Kitchener, Cambridge, Waterloo, and the Townships.

Our mission is to engage our community to inspire, nurture and comfort the human spirit in life, death and bereavement. Learn more: hospicewaterloo.ca

Celebrating and inspiring community through the shared experience of film, the Grand River Film Festival (GRFF) is dedicated to bringing bold, reflective and inspiring local, Canadian and international films to the Region of Waterloo, hosting both an annual festival and year-round film programming. GRFF recognizes the power of film to connect people and is thrilled to act as a vehicle for the community to build relationships and host meaningful conversations within the Waterloo Region. Learn more: grff.ca